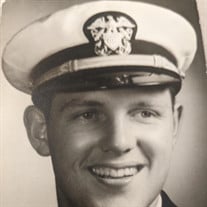 John Charles Young Wright passed away on June 9, 2022 peacefully at home. He was born on May 18, 1925 in Mercer, Pennsylvania to Paul H. and Helen M. Wright. He grew up in Columbus, Ohio and as a proud “Polar Bear” senior he captained his North High School squad to a nearly undefeated football season and a City League title. After graduation from high school, John proudly served his country in the U.S. Navy and later the Navy Reserves. He saw action in the Pacific Theater during World War II. After his honorable discharge from the Navy, John attended and received his undergraduate degree from Denison University, Granville, Ohio, where he was a proud member of Sigma Chi fraternity. He played football briefly for the Denison Big Red under then head coach Woody Hayes. John went on to complete post-graduate work at The Ohio State University where he earned his Master's degree in Petroleum Engineering. Years later he was recognized by OSU with the prestigious Texnokoi Outstanding Alumnus Award. John moved to Sistersville, West Virginia in 1950 to begin a 40-year career with Wiser Oil Company which was headquartered there. He helped build and grow Wiser, later serving as both President and Chairman of the Board when he retired in 1991. John received many awards and served in many capacities during his tenure, including W.Va. Oil and Gas Man of the Year in 1976, Director of the Independent Petroleum Association of America and service in numerous State oil and gas associations including as President of the Ohio Oil and Gas Association. He helped found the Oil and Gas Festival held annually in Sistersville to this day. Always a big supporter of higher education, John also served as a Director of the W.Va. Foundation of Independent Colleges. John loved everything about small-town life in Sistersville. He met the love of his life, Becky Lewis, on a blind date and they were married on June 9, 1951. They raised three children: John (Joanne) Wright of Beaver, Pa., William (Marsha) Wright, Worthington, Ohio, and Mary (Jeff) Taylor of Hurricane, W. Va. They enjoyed 55 years together, and they took great delight in regularly playing golf and entertaining their many friends. John was very active in local civic affairs. Among other things, he served as President of the Sistersville High School Athletic Boosters, in various capacities as a long-time member of Sistersville Country Club, long-time member of the First Presbyterian Church Sistersville where he served as an Elder, President of the Board of Trustees and taught Sunday School for over 50 years, member of Sistersville Jaycees, various veterans organizations, and a member of the group that helped restore Sistersville’s long-time landmark the Wells Inn. He was a loving Father and mentor who, despite his busy work schedule, always took an active interest in his children’s school and related activities. John lived a good and long life—97 plus years at the time of his death. In addition to his parents, he was predeceased by wife Becky (2006) and his only sibling brother Robert in 2002. He is survived by his three children and their spouses, seven grandchildren and three great grandchildren. Arrangements are proudly handled by Myers Funeral Home in Sistersville. The family will receive friends at the funeral home on Friday, June 17 from 11am to 12:30 pm, followed by a brief service officiated by the Rev. Colleen Griffith. A private interment will be conducted at Greenwood Cemetery. In lieu of flowers, memorial contributions may be made to your charity of choice. Online condolences may be offered at myersfuneralhomewv.com

The family of John Wright created this Life Tributes page to make it easy to share your memories.