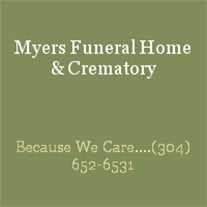 Marjorie H. Racer, 85, of Sistersville, formerly of Paden City, WV, went on to be with her Lord and Savior on July 19, 2012 at Ritchie’s Residential Room and Board. She was born June 11, 1927, in, Friendly, WV, a daughter of the late Ira Elmer Michaels and Mary Allie Tallman Michaels. Marjorie was a homemaker. She was a member of the VFW Auxiliary Post #6327, the American Legion Auxiliary Post #86 and Eagles Auxiliary. She is survived by daughters, Shirley Paschell of Bessemer City, NC, Charlene Snider of Paden City, Christine Racer-Tippins of Middlebourne, Rita Skelley of Friendly and Whitney Racer of Paden City; seven grandchildren and ten great-grandchildren. In addition to her parents she was preceded in death by her husband, Vernon F. Racer; sisters, Irene Knowlton, Wilma Fiest and Edna D’Zoba; and brothers, Harry Michaels and Virgil Michaels. In lieu of flowers, memorial gifts can be made to Alzheimer’s Association, PO Box 96011, Washington, DC 20090-6011. There will be private services at the convenience of the family. Online condolences may be offered at myersfuneralhomewv.com.

The family of Marjorie H. Racer created this Life Tributes page to make it easy to share your memories.

Send flowers to the Racer family.