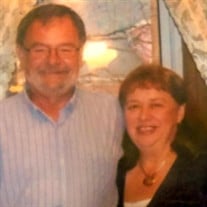 Paul R. "Butch" Wright, Jr., 69, of New Martinsville, WV, passed away at home Friday, April 9, 2021 surrounded by his loving family. He was born September 22, 1951, in Sistersville, WV, a son of the late Paul R. Wright, Sr. and Ruth Ann Dalrymple Wright Shepherd. Paul graduated from Magnolia High School and was an U.S. Navy Veteran who served from July 1972 to July 1975 aboard the USS Intrepid and USS Puget Sound. He was a hard worker who worked in the coal mines for 11 years and later worked 33 years for the Department of Transportation in Tyler and Wetzel Counties. Paul loved camping, fishing and going to the Wilds. He will be sadly missed as wonderful husband, father, grandpa and friend to everyone. He is survived by his loving wife of 49 years, Patricia J. Mercer Wright; children, Patricia Jo Jones (Kevin) of Middlebourne, WV, Brenda R. Nichols (Jim) of Japan and Paul R. Wright , III (Cristina) of Alice, TX; grandchildren, Shayla Jones, Zackery Jones (Mackenzie) and Dakota Jones all of Middlebourne, WV, Isaac Wright and Gabi Wright both of Alice, TX, and Rebekah Nichols of Japan; one great grandchild on the way; two brothers, Bobby Wright of Sistersville and Danny Wright of New Martinsville; several nieces, nephews, cousins and friends who loved him very much. In addition to his parents, he was preceded in death by two sisters, Debra Wright Hartline and Brenda Wright Starkey. The family would like to thank Journey Hospice of Sistersville for being so kind and caring. In lieu of flowers the family suggests making donations to St. Jude Children's Hospital. A memorial service will be held at a later date at the convenience of the family.

The family of Paul R. "Butch" Wright Jr. created this Life Tributes page to make it easy to share your memories.