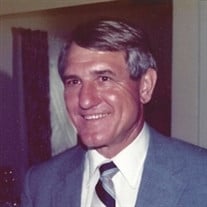 Dr. Ralph Harold Boone passed away peacefully on May 24, 2020, at Camden Clark Hospital in Parkersburg, WV.  He was 95 years old.  Boone had lived since 1953 in Sistersville, West Virginia, a town he dearly loved, and was most recently a resident... View Obituary & Service Information

The family of Dr. Ralph H. Boone created this Life Tributes page to make it easy to share your memories.

Send flowers to the Boone family.