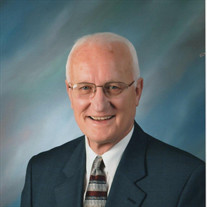 Robert "Bob" Duane Wable, of Sistersville, WV, passed away on Sunday, August 1, 2021 at the age of 84. He was born November 26, 1936, in Wetzel County, WV, to the late Earle Wable and Ada Koontz Wable. Bob was a 1954 graduate of Sistersville High School and a 1958 graduate of The Ohio State University with a BS degree in Education. He was a member of the 1954 Ohio State National Championship football team and remained an avid Ohio State fan throughout his life. He was a past employee of the former Ormet Corporation where he worked from 1959-1969 and was subsequently employed at the former Olin Corporation. In 1974, he purchased the Ford Mercury dealership in Sistersville. He enjoyed golfing, model trains and he loved dogs. Along with the dealership, Mr. Wable was dedicated to the success of his community and County. He served one term as a member of the Sistersville City Council, five terms as Mayor of Sistersville and seven years as police court judge. For thirty years, he was a member of the Tyler County Commission of which he resided as President for many years. He was past member of the State Board of Directors of the County Elected Officials Association, the State Board of Directors of the County Commission Association and a member of the Board of Directors and Finance Committee of the Mid-Ohio Valley Regional Council. Other interests included, serving as past President of the Sistersville Jaycees, former President of the Sistersville Alumni Association, and was past member of the Sistersville General Hospital Board of Managers. In addition, he served as Sunday School Superintendent of the First Presbyterian Church of Sistersville, member and clerk of Session of the First Presbyterian Church and President of the Board of Trustees of the church. He also served as Director of the First Tyler Bank and Trust Company-WesBanco in Sistersville and then served on the WesBanco Wheeling Board of Directors and was a Director of the Union Bank. Finally, he was a member of the Sistersville ELKS Lodge BPOE #333, Sistersville Masonic Lodge and Nemesis Shrine Temple. He is survived by his wife of 62 years, Martha "Martie" Neuenschwander Wable; three children, Dorinda "Rindy" Sue Camerlin (Tom Perrine) of Williamstown, WV, Robert "Bobby" Wable of Pittsburgh, PA and Scott (Tonya) Wable of Sistersville, WV; sister, Doris Cokeley of St. Marys, WV; six grandchildren and six great-grandchildren, with another one on the way. In addition to his parents, he was preceded in death by his sister, Ruby Wable Hess of Bridgeville, PA. Visitation will be Tuesday, August 3, 2021 from 4-7 pm at Myers Funeral Home. There will be a private funeral service for the family. Interment will be at Greenwood Cemetery. In lieu of flowers, memorial gifts can be made to the Olive Branch Animal Rescue, 2499 Badger Run Road, Sistersville, WV 26175. Online condolences may be offered at myersfuneralhomewv.com.

Robert "Bob" Duane Wable, of Sistersville, WV, passed away on Sunday, August 1, 2021 at the age of 84. He was born November 26, 1936, in Wetzel County, WV, to the late Earle Wable and Ada Koontz Wable. Bob was a 1954 graduate of Sistersville... View Obituary & Service Information

The family of Robert "Bob" Wable created this Life Tributes page to make it easy to share your memories.

Robert &quot;Bob&quot; Duane Wable, of Sistersville, WV, passed away on...

Send flowers to the Wable family.