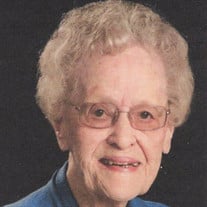 Ruth Hartman Wells, 102, of Washington, WV, passed away at her home on November 2, 2021. She was born September 5, 1919, in Wetzel County, WV, a daughter of the late William and Chloe Hartman. She grew up on a farm in Tyler County. There were twelve children in her family. Throughout their lives they remained very close. Everyone in the family looked forward to the Hartman reunion every summer in New Martinsville, WV. When Ruth was twelve years old, her mother passed away. Ruth then helped take care of her younger siblings. When she was older, she worked at Paden City Pottery. In 1946, she married Glen Wells. Most of her married life was spent in Sistersville, WV. Glen and Ruth were married for 56 years before he passed away in 2002. Ruth had the heart of a servant. She was always looking for ways to help someone. Many people enjoyed receiving her homemade bread, cinnamon rolls, pies and vegetable soup. She was a member of the Oxford Street Church of Christ, where she was dearly loved. When she moved to Washington, she became a member of Camden Avenue Church of Christ. She was a lifetime member of Stepping Stones of Ohio Valley College. She is survived by her son, Arlen (Marsha) Wells of Sistersville, WV; daughter, Nancy (Paul) Inman of Washington, WV; brother, Clyde (Ruth Ann) Hartman of Brentwood, TN; grandchildren, Eli and Ethan Wells, Jennifer (Alan) Martin, Joel Inman and Stephanie (Brent) Flinn; ten great-grandchildren and many nieces and nephews. In addition to her parents, she was preceded in death by her husband, Glen; a son, Richard Wells; brothers, Gene, Clarence, Robert, Ed, Roy and Norman Hartman and sisters, Gert Rogers, Sara Hoover, Louise Holtsclaw and Evelyn Koran. Visitation will be Saturday, November 6, 2021 at the Oxford Street Church of Christ from noon until time of service at 2:00 PM. Interment will be at Greenwood Cemetery. In lieu of flowers, donations may be made to Midwestern Children's Home, PO Box 48, Pleasant Plain, OH 45162 or Love and Care, PO Box 1512, Parkersburg, WV 26101. Online condolences may be offered at myersfuneralhomewv.com.

Ruth Hartman Wells, 102, of Washington, WV, passed away at her home on November 2, 2021. She was born September 5, 1919, in Wetzel County, WV, a daughter of the late William and Chloe Hartman. She grew up on a farm in Tyler County. There... View Obituary & Service Information

The family of Ruth Wells created this Life Tributes page to make it easy to share your memories.

Send flowers to the Wells family.